Jimmy LaRose continues to turn the nonprofit sector upside down with his second edition of RE-IMAGINING PHILANTHROPY. This week BookAuthority named LaRose’s RE-IMAGINING PHILANTHROPY to their 100 Best Philanthropy Books of All Time ranked at #41. BookAuthority, as featured on CNN, Forbes and Inc identifies and rates the best books in the world based on public mentions, recommendations, ratings and sentiment. (Click on the medallion below TO VIEW THE ENTIRE LIST!) 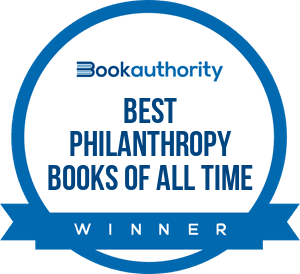 When asked why RE-IMAGINING PHILANTHROPY? Jimmy LaRose replies, “Because I wrote it for donors! Not fundraisers, not executive directors, not nonprofit consultants. FOR DONORS ONLY!” LaRose goes on to say, “Philanthropists are our great recourse. You see, as a benefactor, foundation trustee, or corporate giver, donors are uniquely positioned to challenge the existing order of things on behalf of a failed charitable sector. They’ve already worked through many of the problems that have paralyzed nonprofits, and possess the solutions that will set us all free. There are reasons why “big givers” are prosperous and the charitable sector is not. Donors possess a treasure trove of intellectual wealth that 501(c)3 organizations urgently require. It’s their money, it’s not their network…it’s their experiences in life and enterprise that will make us a success!”

Jimmy LaRose and the success of RE-IMAGINING PHILANTHROPY are rooted in his ability to stories. Simply put, storytelling is the key to engaging donors. The most important reason being that stories contain lessons that teach us to love, to forgive others, to be just and to strive for better than we have. Jimmy LaRose has mastered this art form. Here’s a sample of how he inspires philanthropists through his writings.

“Did you hear the one about the executive director of the local charity who was walking down the street and fell into a hole with walls so steep he couldn’t get out?

His consultant passes by and the guy shouts up, ‘Charlie, can you help me out?’ The consultant says, ‘I can help, but it’ll cost you $5,000 dollars.’ The guy says, ‘Fine,’ so the consultant gets out his PowerPoint and performs a two hour training, titled, ‘Five Ways to Get Out of Holes With Steep Walls.’ He then asks the guy to remind him where to send the invoice, and moves on. A board member, who he hasn’t heard from in weeks, come along, and the guy shouts up, ‘Sharon, I’m down in this hole, can you help me out?’ The board member says, ‘Sure, I know this great nonprofit consultant, he’s an expert hole problem solver, I’ll have him give you a call,’ and moves on. Then a donor walks by, and the guy shouts up, ‘Hey Jack, it’s me; can you help me out?’ Jack doesn’t say a word, but instead jumps down into the hole. The nonprofit exec says, ‘What? Why’d you do that? Now we’re both in trouble.’ Jack replies, “Yeah, but I’ve been down here before, and I know the way out.’

Donors are the key. Donors know the way out!!!”

I’ve been privileged to write about Jimmy in the past. (See my article JIMMY LAROSE – VILLAIN OR HERO FOR NONPROFITS?) He has a rich history of challenging the status-quo and inspiring change across the charitable sector. In closing, allow me to share…

…Jimmy LaRose has done it again!

Jimmy LaRose Book – Top 100 Philanthropy Books of all Time was written by Reverend Louis Fawcett, who holds a BA from Randolph-Macon College and two Master Degrees from Wake Forest University and Lutheran Theological Southern Seminary. He was privileged to Pastor three Lutheran congregations in Florida, North Carolina and South Carolina. His service to the charitable sector began with his work at Christian World Foundation where he raised support for orphans in China, Russia and Ethiopia. During the 2008 recession, Louis led a successful campaign to build a children’s home in Ethiopia. Following the 2010 earthquake, Louis transitioned to Haiti Children, a charity serving destitute families and children in that island nation. In 2013, Louis accepted the position of Senior Vice President of Principal Gifts at EdVenture Children’s Museum where he forged collaborations with under-resourced communities by raising major gifts throughout South Carolina. He has served Central South Carolina Association of Fundraising Professionals (AFP) for seven years as both board member and president. He was honored in 2016 as AFP’s Outstanding Fundraising Professional. He now serves as President of the National Association of Nonprofit Organizations & Executives.